Turn it Like Turley – Anniston’s Donoho Scores to Win

Erin Turley had her hands full.

At the end of the day, after Donoho dispatched Oxford 2-1 to win another Calhoun County Soccer Tournament championship, the Lady Falcons’ sophomore left the pitch with the championship trophy, an all-tournament plaque, the MVP award for the third year in a row and a unique trinket to match the latest piece of game-day headwear coach Jay Jenkins wears on the sideline.

Under one arm Turley carried a little stuffed unicorn, the customary prize for the Donoho girls’ Player of the Game this season. The toy is an extension of the unicorn hat Jenkins is wearing this year to replace his curly wig the Lady Falcons had bronzed after it took them all the way to the state finals last year.

“I think it really keeps our team together,” Turley said. “We’re a team that loves to have fun and when we don’t have fun we don’t play well. That’s what jay always instills in us, that we have to have fun when we play, it’s part of the sport.”

Jenkins already was having run talking about the unicorn hat, but he laughed even harder when he realized it was the first time Turley had won the unicorn this season. She definitely earned it.

She scored both of Donoho’s goals on spectacularly long and curling shots in the final nine minutes to bring the victory home and keep the Lady Falcons undefeated (10-0).

Time was running out and the Lady Falcons admitted they were getting a bit anxious, but they changed their attack to apply more pressure and Turley finally broke through.

Her first goal came on a 40-yard free kick that floated in the wind and dove into the goal just under the crossbar with 8:48 to play to tie the game 1-1. Her game-winner with 2:31 to play was even more spectacular, coming from near the left sideline about 25 yards out but with a good 50 yards of Bend It Like Beckham curve into the upper right corner.

“All game I had been kicking it over the goal, so we got that free kick almost at midfield and I just had a a feeling the wind was going to carry that bad boy all the way into the net,” Turley said. “The second one happened really fast, but I saw it curving and that’s when I knew it was going to drop in.” 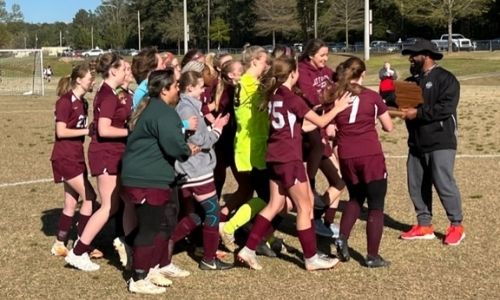 “It’s funny,” Jenkins said. “(Assistant coach) Matthew (Wright) called the goal on the kick on the first one. I called it on the second one. The wind definitely played a huge factor in it today in getting us there. We’ve got the will of a champion on this team – they won’t ose. We’ve not played our best soccer the last few days, few weeks really, but they somehow find a ‘W’ every time. I’m so amazed with them.”

Oxford had the wind at its back in the first half and took a 1-0 halftime lead after Macie Williams took a through ball from Alex Reyes and got it behind Donoho keeper Maggie Wakefield with 6:17 left. It was only the third goal the Lady Falcons have allowed in the five-year playing of the county tournament.

The way the Lady Jackets seemed to be controlling the play, it looked like the biggest threat to Donoho’s county tournament domination would finally come to fruition. But Jenkins knew it wasn’t enough.